Educational technology offers useful tools to promote learning. Even before the pandemic, classrooms and offices adopted digital tools to aid and reinforce their communication. However, in a relatively short period, these technologies have evolved and found greater purpose.

An ILE, or Interactive Learning Environment, is a system built in software, and sometimes with specialized hardware, designed for education for both teachers and students. It can be used for academic, work-related, or informal education and leaning. It takes a social constructivist approach to academics and incorporates many facets of educational technology.

A new ILE has been developed by healthcare marketing communication agency Onyx in collaboration with Animmersion made for healthcare practitioners to continue sharing their knowledge with both colleagues and patients.

The system uses digital technology combined with virtual and augmented reality to provide an immersive and rounded digital experience, to facilitate remote learning.

Additional features of the ILE allow for conference calls and presentations, product demonstration, medical education, direct linking, virtual advisory boards and much more – all centered around the medical industry.

The online communication tool aims to reshape and augment the way healthcare, medtech and pharma professionals communicate between each other on account of Covid-19 and the precautions thereafter.

This allows for greater sharing of knowledge with students, practitioners and researchers in a time where face-to-face conferences are out of the question, and medical progress is needed more than ever, with new communication and educational technology at the forefront.

“The COVID-19 outbreak has had a seismic effect across the communication industry. This is especially true for many of our clients who have lost that face-to-face connection with their customers”, said Onyx Health Managing Director, Karen Winterhalter. “Keeping a business as usual agenda has required the creation of new and innovative ways for our clients to engage effectively with their target audiences”.

“The practical consequences of the lockdown, lack of international travel and the general decline we have seen in the ease of access to customers inspired us to develop ILE new communication solution to overcome these challenges.” Winterhalter affirms.

Covid-19 mass testing should be an integral part of any plan to navigate the pandemic. The main objective across the board would be to incrementally ease lockdowns, curfews, and restrictions, open up and revive the economy, all while avoiding a second-wave. Testing is key to all of this. Without proper strategic testing, we cannot effectively isolate, contain and subdue any new pockets of infection.

Governments and institutions, especially those in developed countries, have all the tools they need to begin mass testing and start alleviating confinement. Ideally, restrictions wouldn’t be lifted until a vaccine or effective treatment is created, but that is sadly some time away, and so other measures must be implemented.

The questions to ask would be: What to test and how?

The answer to the first “what to test” is shorter: There are two types of tests, molecular diagnostic testing (RT-PCR), and serology tests. The first, is a standard test to identify whether the person is currently infected or not, and gaging the percentage of infected people within an area or community. The second, reveals whether the person has been infected before, and has developed antibodies. This is to allow people who have developed an immunity to return to work safely, and to provide samples and data that could help in vaccine development and better understand the virus.

The “how” is a slightly longer story. One of the most effective strategies that have been tried and tested by other nations such as South Korea is ‘Testing, Tracking, and Tracing’ – or TTT.

Another technique for COVID-19 mass testing is known as “Assurance Testing”. Simply put, organizations, communities or even entire towns can request that their members be tested as a whole. This means that testing kits can be supplied on demand for an entire group, easing the organization, logistical strain, and procurement of medical supplies. It is an effective way of opening up the economy slowly and methodically as each office building or company that gets tested all together can pretty much return to work. If infected individuals are found, measures are taken.

It seems like COVID-19 mass testing is the only way out of this mess. We can’t all sit at home; someone has to run all the machines and keep society marching on. But things cannot go back to normal so quickly and easily either. Strategic implementation is key. 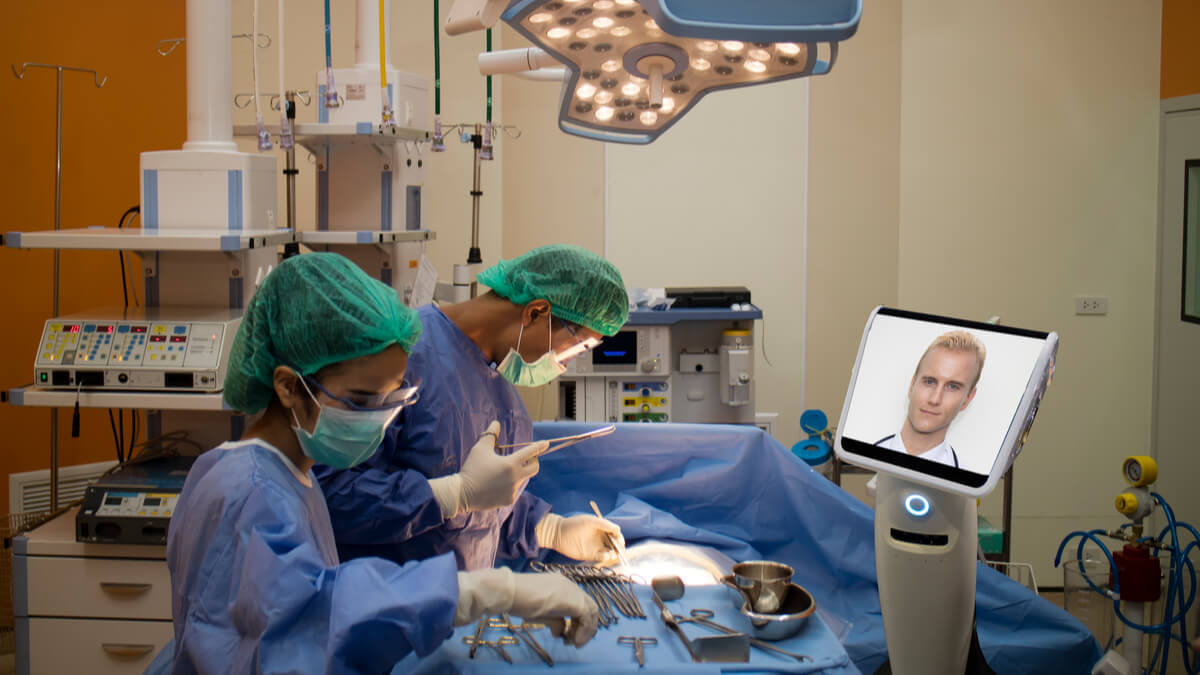 A digital design specialist from the Annenberg School for Communication has successfully created a 360-degree VR video demonstrating COVID-19 treatment procedures to prepare medical staff that are in remote locations to respond to emergency cases.

VR is a fully immersive technology that can benefit medical personnel by generating 3D, interactive environments in settings that are usually too hard to simulate with simple 2D graphics, the video here, was filmed in the Emergency Department in the Hospital of the University of Pennsylvania. Via operation performed on a mannequin, the video illustrates a doctor treating a COVID-19 patient that is suffering from respiratory failure.

Even though the video is available to almost everyone, it was specifically made for healthcare providers that have been exposed to high levels of critically ill COVID-19 patients. The video can be accessed by medical staff via YouTube and Annenberg’s website through a computer screen or even with a VR headset.

Kyle Cassidy, Annenberg digital design specialist, has spearheaded the project when he first created a VR video back in 2018 to teach people how to use Narcan, an anti-opioid overdose reversal agent. After Cassidy presented a paper regarding the video at a healthcare conference, a physician at Weill Cornell medicine, Kevin Ching, reached out to Cassidy in mid-Apil asking him for help in developing an educational VR video that highlights Coronavirus treatment practices.

Lauren Weinberger Conlon, Assistant Professor of Emergency Medicine at the Hospital of the University of Pennsylvania, serves as the video’s principal actor as an attending physician, has mentioned that the project deeply focuses on VR video demonstrating COVID-19 resuscitation of a patient with respiratory distress. Conlon worked closely with Ching, as well as Weill colleagues, Amos Shemesh and Neel Naik, in order to draft the video script and ensure that information presented was clear and consistent.

To make the video come to life, Cassidy used a special camera with six outward facing lenses from Penn Libraries Vitale Digital Media Lab to capture a realistic 360-degree perspective of the hospital setting and surroundings. The VR aspect of Annenberg video makes it easier for the medical staff to better prepare for the possibility of distractions in a high-pressure atmosphere as they treat a COVID-19 patient with respiratory failure.

Cassidy mentioned that there is an in-person aspect to medical teaching which often requires people to look in different directions, to physically touch something, see something move, formulate a decision, and see the outcomes of their decisions.

A recording studio assistant for Vitale Digital Media Lab at Penn, Christopher Vandegrift, edited the majority of the video by stitching the six lenses of the camera closely together, and by adding noise and lighting adjustment, and inserting onscreen graphics all in order to produce the VR video demonstrating COVID-19 resuscitation techniques. The video took around 20 to 40 hours to edit after receiving the unedited version. Vandegrift mentioned that VR makes it real and immersive in a way that normal video would not be able to capture. 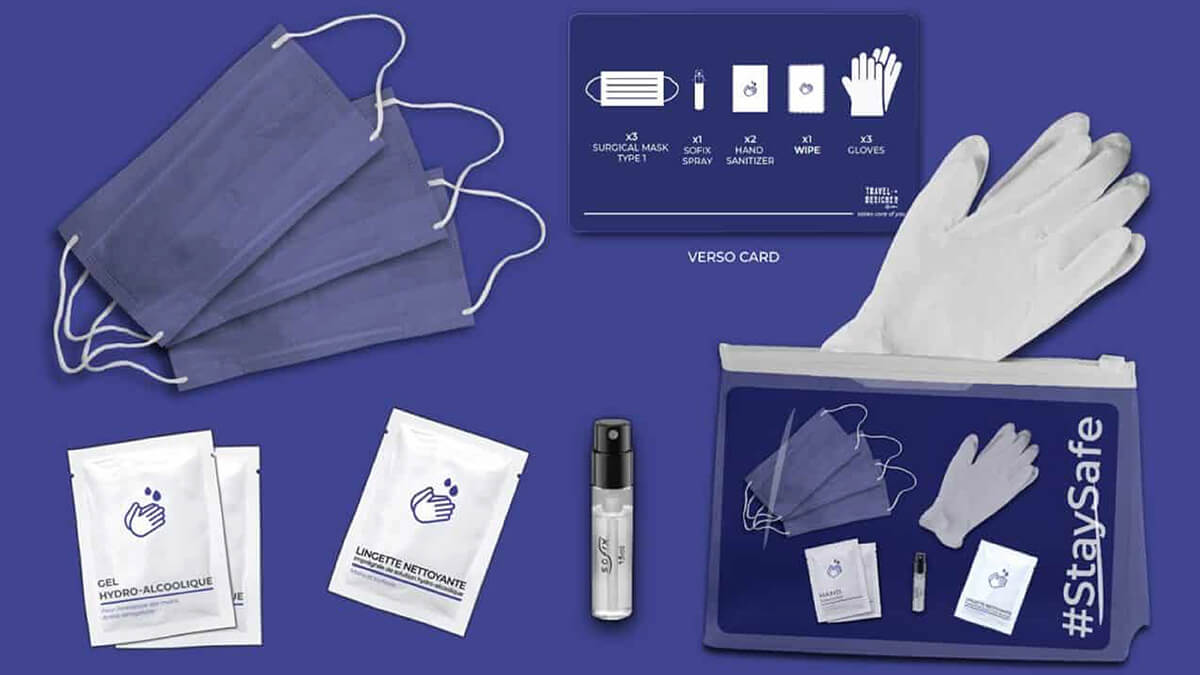 The travel industry has taken the hardest hit during the pandemic. Many people are reluctant to fly due to the growing fear of inadequate hygiene and sanitary precautions on a flight whilst being in close proximity to other passengers and staff. To tackle this issue, Albea Travel Designer has come up with a stylish and innovative prototype: a customizable COVID-19 travel kit dubbed ‘Travel&StaySafe’.

The kit will be available for delivery worldwide and can be purchased via the companies’ ecommerce site. It is designed for airlines, transportation companies, agencies, and operators like taxi services, shipping companies, vehicle rentals, rail companies, to ensure their customers’ safety and comfort.

The COVID-19 travel kit comes with different types of masks that are reusable and which come in both adult and child sizes. It can also include gloves, hand cleaning gel, disinfectant wipes, hydroalcoholic solution, or a lab coat, if you choose to have it that way.

What is also cool about the kit is that it can be customized to any company’s brand design. This might be considered an added extravagance by some, but visual appeal adds intrinsic value to this item. Companies can choose to have their COVID-19 travel kit blend in with their image and feel, integrating better hygienic habits seamlessly into their brand identity and everyday life.

Even in a post-COVID-19 world, hygiene, sanitization and safety measures will stay in people’s minds for a long time to come. Companies must adapt to the new hyper-cautious, hyper-vigilant, and borderline-paranoid way of thinking that people have forcibly adopted. Integration by visual design is certainly one way to do it.